In the world of pharmaceutical product development, an effective drug to treat Alzheimer's disease (AD) is the Holy Grail. Very little has been successful in this area to date. Neurodegenerative diseases remains a difficult area for new product development and Alzheimer's by far has been the most challenging. Nevertheless, this is an enormous market opportunity. Around 50 million people worldwide have dementia, including nearly 6 million in the U.S. with Alzheimer's alone. By almost all accounts, prevalence is increasing rapidly. Two independent research firms, Market Study Group and Reports and Data, forecast the Alzheimer's disease market to reach global sales of $10.5 billion in 2025 and $12.4 billion in 2026, respectively. 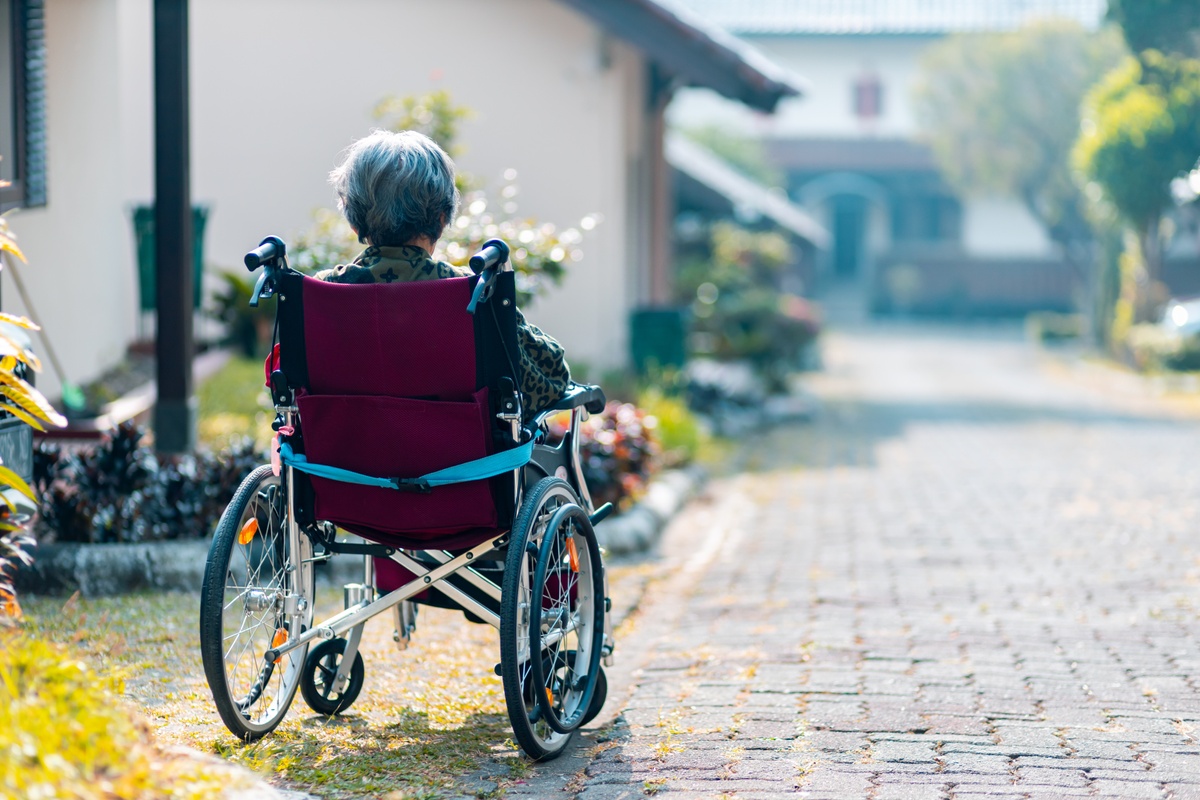 Yet researchers have not given up hope. Recently, Biogen announced plans to seek approval for aducanumab as a treatment for Alzheimer's disease. Aducanumab is a monoclonal antibody that targets the build-up of aggregated β-amyloid found in the brains of people with Alzheimer’s disease. Most independent sources conclude that Aducanumab doesn't work, but the news that Biogen will seek approval of the drug added nearly $15 billion to the company's market capitalization. Clearly, this is an area of the highest attention for patients, physicians, and investors alike.

Novartis studied rivastigmine in over 5,300 Alzheimer's patients prior to approval. Data from the Phase 3 studies showed patients taking rivastigmine had improved cognitive performance versus patients on placebo as measured by two assessments of Alzheimer's disease progression, the Alzheimer's Disease Assessment Scale (ADAS-cog) and the Clinician's Interview-Based Impression of Change (CIBIC-Plus). Importantly, there was a dose-response, showing patients with greater exposure to rivastigmine performed better.

Unfortunately, sales of Exelon® capsules were limited by some nasty side effects. Nearly half of the patients taking the drug complained of nausea and nearly a third reported incidence of vomiting. Another nearly 20% complained of abdominal pain, diarrhea, and dizziness. In order to improve compliance with rivastigmine, Novartis developed a transdermal patch. This circumvented the oral delivery and greatly reduced the gastrointestinal (GI) side effects of the drug, although it did bring upon a new side effect of application-site erythema or pruritis in about 10-15% of patients (combined) and in real-world studies it’s more like 30-50% of patients (combined). However, the patch resulted in a delayed onset of action. It may take up to 12 weeks before some patients see a benefit from using Exelon® Patch.

The patent on rivastigmine has expired, allowing for other pharmaceutical companies to develop improved formulations of the drug. Lachesis Biosciences of Melbourne, Australia, is one such company working on an improved formulation of rivastigmine. In fact, Lachesis CEO, Dr. Timothy Morgan, has two assigned patents that relate to "Intranasal compositions for treatment of neurological and neurodegenerative diseases and disorders", one in the U.S. and one with the World Intellectual Property Organization (WIPO).

Nasal sprays are a common alternative to oral or intravenous dosing of pharmaceutical products. Existing nasal spray devices reliably deliver our proprietary formulations to the inferior (lower) nasal turbinate. It's really a quite simple concept and commonly used for drugs were a rapid onset of action is desirable. For example, J&J just recently received approval for a nasal spray antidepressant called Spravto™(esketamine). Nasal sprays are easy to administer, stable at room temperature for years, and a great way to deliver drugs with poor oral bioavailability or high incidence of GI-related side effects.

Lachesis Biosciences is developing LBIO-R32, a rivastigmine nasal spray for the treatment of mild to severe Alzheimer's disease dementia and mild to moderate Parkinson’s disease dementia. Lachesis is pursuing a 505(b)(2) development pathway for LBIO-R32, which means the company can substantially rely on existing preclinical and clinical data generated by Novartis with rivastigmine for approval. From a development standpoint, this takes years and hundreds of millions off their plate. It's a significantly de-risked and expedited approach.

Lachesis investigated nasal formulations of rivastigmine (3.126 mg) in a single dose, crossover bioavailability and safety study compared to intravenous (IV) rivastigmine solution (1 mg) in eight healthy elderly individuals, aged 58–75 years. The results show that the absolute bioavailability of the nasal spray was 0.62 ± 0.15, which compared favorably to the IV formulation (see figures 1 & 2 below) and was also superior when compared to historical values for oral capsule and transdermal patch determined by other researchers (Morgan & Soh, 2016). Rivastigmine nasal spray had a rapid onset of action and favorable safety and tolerability profile, showing only mild irritation in some users in the nose and throat.

The next steps for Lachesis are to run a pivotal efficacy and safety study of LBIO-R32. These will be a pharmacokinetic study in about 24 subjects and an open-label, six months duration study in about 140 subjects with mild to moderate Alzheimer's disease dementia. As previously noted, this is a relatively de-risked program because we already know that rivastigmine works - after all, the FDA already approved Exelon® and Exelon® Patch. For LBIO-R32 to gain approval, Lachesis has to show the nasal spray is comparable to the oral or transdermal formulation and based on the previously reported Phase I data, that seems like a very fair argument to make. This will also be a relatively inexpensive study, costing Lachesis around $15 million to complete. That's an incredibly low investment considering the size of the AD and dementia market and the potential blockbuster sales opportunity for the drug.

Lachesis Biosciences has a low-risk, potential high-reward asset nearing a pivotal registration study for an enormous market opportunity in the U.S. The company is pursuing an expedited pathway and previous human data suggest the drug works as expected. Beyond rivastigmine, the company is working on other formulations of drugs that target neurologic disorders that can be formulated into nasal sprays. The platform looks broadly applicable and just might attract interest from larger pharmaceutical companies looking for that Holy Grail of assets for Alzheimer's disease. 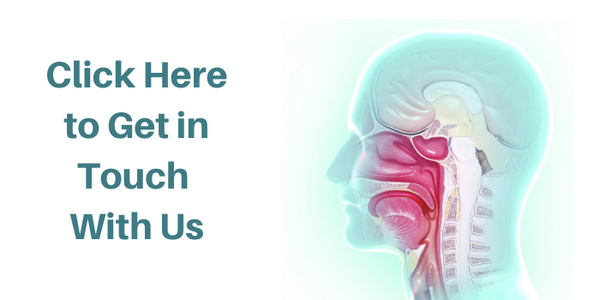 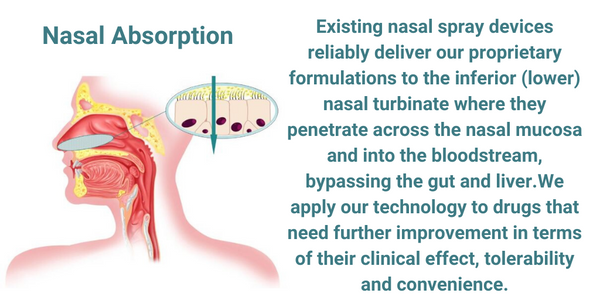 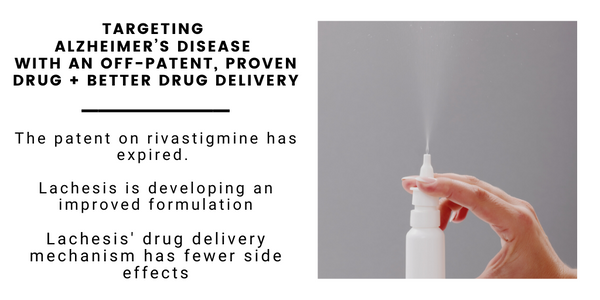 Federal government grant for world-first dementia treatment invented in Warrnambool
Download
Related Bios
https://cdn.filestackcontent.com/7NVEaIP4Suu0zyjwc2PQ?dl=true
https://cdn.filestackcontent.com/AG3wH2AR3SP2Mo58NZitaz/rotate=exif:true/resize=width:600/7NVEaIP4Suu0zyjwc2PQ
im is a founder of the Company and has been a Director since 2005. He was a founder and Director of Business Development at Acrux Limited. He has more than 18 years of experience in the pharmaceutical industry. He commenced his career at Glaxo in 1992 then undertook his higher degree research training at Monash University from 1994 to 1998 before founding Acrux Limited in 1999 and Lachesis Biosciences in August 2005. He has a Bachelor of Pharmacy with Honours and PhD from Monash University. He is a registered Pharmacist in Australia. His PhD research was competitively recognised both locally and internationally. To date, three prescription pharmaceutical products for which he was named as co-inventor have received marketing approval.

Dr Timothy Morgan
Chief Executive Officer and Managing Director, Founder
View Full Bio>>
https://cdn.filestackcontent.com/0GDw973sSFaPSADSZHkg?dl=true
https://cdn.filestackcontent.com/AG3wH2AR3SP2Mo58NZitaz/rotate=exif:true/resize=width:600/0GDw973sSFaPSADSZHkg
Christian was appointed as a Director and Chairman in July 2016. He is an investment banker with over 18 years of experience working in Australia, the United States, Japan, Hong Kong and the United Kingdom. He has advised on some of the largest transactions in the healthcare sector in Australia. He spent over 10 years at Goldman Sachs working in the healthcare, telecoms, industrials, financial sponsors and mining sectors. In 2010, he left Goldman Sachs to become Head of Investment Banking at Investec Australia and led a team of professionals to substantially grow Investec’s advisory business. He left Investec in 2014 to establish Valkyrie Corporate Advisory Partners, which provides specialised investment banking and corporate advisory services. He graduated from Stanford University with a Bachelor of Arts in Economics. He is a Member of the Australian Institute of Company Directors.

Mr Christian Nicks
Non-Executive Chairman
View Full Bio>>
https://cdn.filestackcontent.com/bDhJoSnmSAyI7a4MghXO?dl=true
https://cdn.filestackcontent.com/AG3wH2AR3SP2Mo58NZitaz/rotate=exif:true/resize=width:600/bDhJoSnmSAyI7a4MghXO
Amanda was appointed as a Director in July 2016. She is a commercial strategy and licensing specialist with over 18 years of experience in the pharmaceutical industry locally and overseas. She spent over 12 years at CSL from 2002 to 2015, most recently as Associate Director for In-Licensing. At CSL she gained broad experience across business development, regulatory affairs, medical affairs, R&D commercialisation, brand management and in-licensing roles. Her extensive commercial expertise is applied to her current executive role as Director Commercialisation and Business Development at Peter MacCallum Cancer Centre whom she joined in May 2019 after 4 years at Paranta Biosciences in a similar role. She commenced her career in specialty pharmaceuticals at AstaMedica in 1997. She has experience in a growth-stage, entrepreneurial company whilst at Optiscan Pty Ltd from 1998 to 2002. She has a Bachelor of Science with Honours and PhD from Monash University.